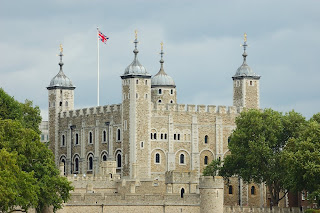 The of , ’s oldest palace, fortress and prison, lies in the south­east corner of the City, on a site where the ancient Britons probably had a stronghold, on the ruins of which at the time of the Emperor Claudius the Romans built a fortress. Thi s too was destroyed and the site used by tire Saxons under Alfred the Great. The site’s stra­tegic position dominating the river led William the Conqueror to choose it for erecting a fortress to protect the city and to show its inhabitants the might of their Norman con­querors. The king summoned Gundulf, bishop of , to build the handsome but formidable tower he wanted. Great blocks of limestone were brought from in and used with the rough slate from in the construction. Powerful walls, up to ten feet thick, were erected, and inside them the almost square tower, with four turrets, three of them square and one circular. Thick buttresses stretch up from the base to the battlements. It is probably called the because in the Middle Ages it was whitewashed; the name has remained over the centuries although there is now no trace of white about it. And although the narrow Norman slots in the fortress walls have since been substituted by more ample glass windows, the essentially military structure of the Tower, with its solid, daunting appearance, has remained. After William various other kinds enlarged the Tower, adding walls, bastions, towers and other structures, until the of became one of the most massive impregnable fortresses in . But it was not only a defensive building: it was also an armoury, treasury of the Regalia and Crown Jewels, (it was the custom for the sovereign to reside in the Tower before his coronation) and prison for offenders against the State. As such, it has a fascinating history, with many dramatic and bloody moments. It was especially during the reign of the Tudors that the Tower gained its most infamous reputation, not only as a State prison but also as the site of executions. Among those beheaded there by Henry VIII were two of his wives, Anne Boleyn and Catherine Howard, Bishop Fisher and Sir Thomas More. I too, although she herself had had a brief acquaintance with imprisonment in the Tower, ordered various executions there, including those of the Duke of Norfolk, the Earl of Essex and the celebrated explorer and man of letters, Sir Walter Raleigh. The last execution in the Tower was two centuries ago, in 1747, when Lord Lovat was put to death. Now on display, as a reminder of all those condemned to death, are the executioner’s axe and block, from which so many heads, crowned and uncrowned, fell.
(Taken from: LONDON, Giovanna Magi, Bonechi Publishers 1977)